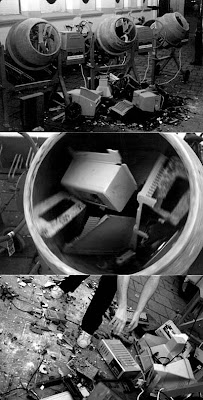 Simultaneously at both the Boston & Dutch stagings of this intercontinental performance, The Haters used amplified electric drills to make sawdust out of wood. In the Boston segment the U.T.B. was used as an extra sound source, while in the Dutch half a third and forth member progressed the live sounds of the drilling. About 50 people were in attendance at both stagings. Outside before the Dutch event commenced, some computers were cast into four cement-mixers. The computers crushed themselves to pieces rolling about in the rotating barrels which acted as loud-speakers for the breaking.
Posted by GX Jupitter-Larsen at 9:54 AM